After a solid performance last week which found Team Dignitas splitting the difference and going 1-1 for the week, we caught up with the Jungler for Team Dignitas, Dong-jin 'Helios' Shin as well as the interim coach and head coach for our EU squad, Ram 'Brokenshard' Djemal. We sat down with them to give us their thoughts on their most recent performance as well as expanding to talk about new patch changes, including recent jungler changes. Enjoy the interview!

From your guys' perspective what went wrong in the TSM match?

Helios: I think that game was very close, but we made two mistakes which lead to TSM snowballing the game. Our team was built similarly to snowball off of mistakes but there weren't many mistakes made by them this game.

Was it a gamble to play a team composition like that?

Helios: I don't think it was much of a gamble, we just made some mistakes and TSM capitalized on them.

Brokenshard: Early game the idea behind the comp was to get an advantage in the midlane after a lane swap. We knew the lane swap was coming, as it was fairly well telegraphed through their picks and we knew what their strategy was going to be post laneswap. We wanted to alter the mid wave; basically Shiphtur doing something to the mid wave which would put Bjergsen in a precarious situation, then Helios and Kiwikid were supposed to gank Bjergsen and force his flash or even get a kill which would help snowball the game from that point.

From a coaching perspective, it was a bit of a gamble because I didn't pick enough hard engage and if we had picked more hard engage we might've been able to do a little bit more coming into the game.

What kind of hard engage in particular?

Brokenshard: Something like a Nautilus or even picking Maokai in the first rotation of picks & bans. It was obvious they were going to pick Kog'maw, and we wanted the picks that we got, but if we had taken more hard engage the early game wouldn't have necessarily mattered as much.

Let's move on to the Gravity game where there's perhaps more good news to talk about, though I have to talk about the dragon steals that Move pulled off, what were your thoughts?

Helios: That is my bad, totally my bad, I just don't want to watch that again. I think I was a little unlucky, but they were super close each time.

Brokenshard: Move did go on to Smite steal like 20 other things that weekend, so you can't really say too much about that.

So breakdown the Gravity game for us?

Brokenshard: The Gravity game was just a standard pick and ban phase, it wasn't necessarily anything special or unique. The idea behind it was that we knew what they wanted to pick and then simply counterpick midlane, or to counterpick Keane specifically. He's usually going to pick something stupid or crazy, like Rumble mid, and then we'll just pick something to bully it. When we saw that he picked Rumble mid, we had Rek'sai, Ahri, and Thresh and had Helios and Kiwikid sit mid lane allowing Shiphtur to snowball a little bit.

What was seeing the pentakill like for you guys, was it exciting?

Helios: Everyone was super excited after it happened, but I was like: "Guys we need to calm down, let's finish the game first." Then we played the game, and then we threw the game... arghh

Brokenshard: In the end though, we won!

Helios, when you were telling the team to calm down and focus in, are you the biggest voice or shotcaller for the team then or does Kiwikid also participate?

Helios: Both of us are talking a lot. If I say a certain plan or Kiwikid gives a certain plan then if the team agrees to it, we do it. Together we all communicate between each other. Although it's mostly myself and Kiwikid that are shotcalling, Danny will chime in as well. Our communication as a team is more together than it was earlier.

Brokenshard: Generally everyone is communicating and calling out timers for flashes or objectives, but the main guy is definitely Helios. If he says to go in, then everybody should be ready to listen to that call and follow through. 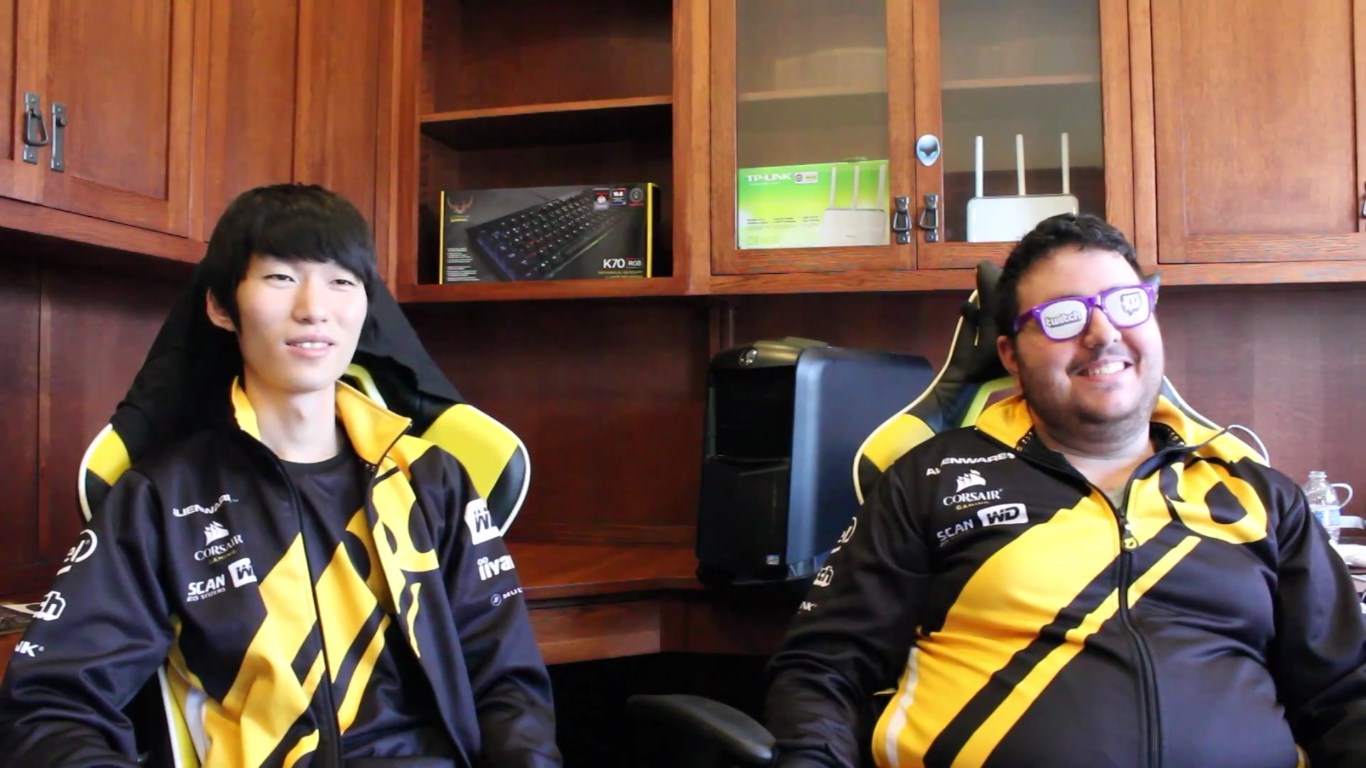 I happen to hear CoreJJ a lot during games, he seems very loud.

Helios: Yeah, he has a very big voice and likes to shout.

Do you think that even though he's loud, he's a good voice to follow in fights?

Helios: Sometimes I think it can be a good thing, but there's also a downside to it as well. Sometimes you won't be able to hear the other teammates but if I'm very tired and I hear Core shouting I'll let him call out our targets in fights.

Speaking further about the Gravity game, what was the general gameplan after Shiphtur got the pentakill? It seemed like you guys were focused on taking the dragons.

Brokenshard: Yeah, basically. We wanted to trade turrets for dragons, because that's the only thing Gravity could do, siege turrets. We wanted to trade dragons for turrets and get the fifth dragon and then snowball the game from that point because they could take as many turrets as they wanted but we had a gold lead so even if they got turrets, we would still have a gold lead, so it wouldn't have mattered once we got fifth dragon. The conscious decision was that we let them take one turret for every dragon we take, and the gold that they got wouldn't matter since we got the buff from fifth dragon.

Gravity's composition was good at defending the hard engage from Ahri, it was difficult to find our flanks. A great Gnar ultimate is only going to happen once per game. After it happened that first time they were going to be so scared of Gnar and stay far away from him. Gravity did a great job at stopping us from enganging onto them so we had to just trade objectives.

I want to talk about Rek'sai now. Helios, you've played him in almost every game so far this split. Are you prepared if teams focus their entire ban phase specifically on you?

Helios: Although I haven't showed them yet, I'm perfectly capable of playing champions like Nidalee, Nunu, Gragas. If they pick Rek'sai it doesn't really bother me as I can just go ahead and pick whatever fits best for the team.

What do you think of the new Devourer enchant and Runeglaive for junglers, and what champions would you use for both?

Helios: I've tried champions like Jax, Kayle and Master Yi. My personal feelings is that Master Yi jungle is a fail, but champions like Jax and Kayle are a little bit good. I genuinely think Kayle might have potential because her kit is very useful, though I haven't tested her enough as I've only played her for a week. Maybe when I finish testing her, I can use her in playoffs or something.

As for Runeglaive I think it's ok, and with all the other new AP items as well, it makes AP junglers quite a bit better. 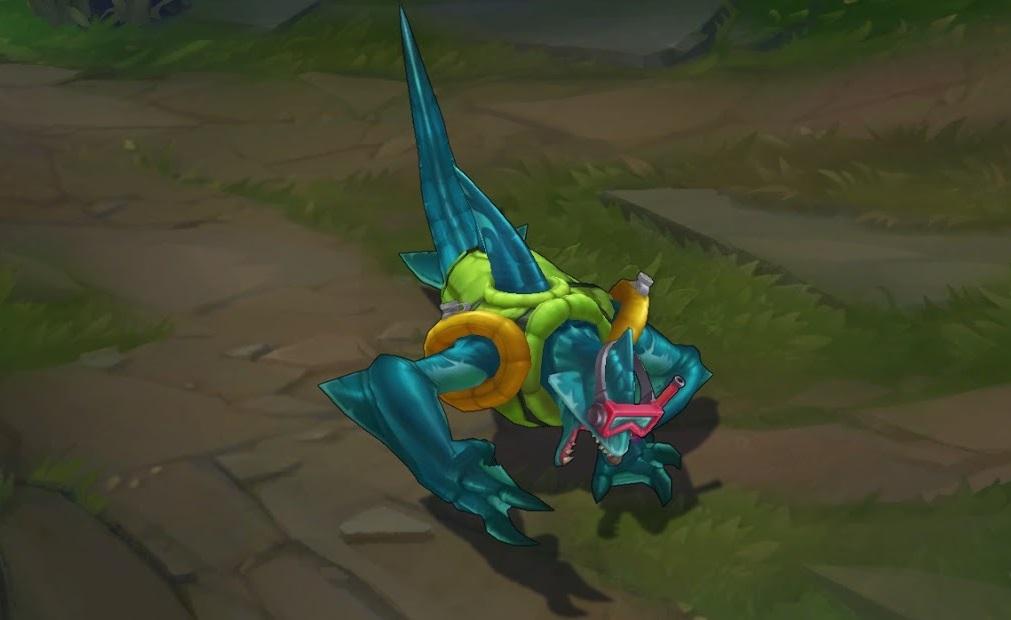 Not just Runeglaive in the midlane?

Helios: I believe next patch, Runeglaive won't be as strong for midlane champions.

Brokenshard, tell me your perspective as a new coach, what do you see when you sit down with them?

Brokenshard: The communication is really good and they talk about the PBE changes a lot, way more than my EU team does. They talk a lot and it's very refreshing to see, even the Koreans that don't speak english very well are still all communicating and providing information in scrims, which everyone also takes seriously. There's a lot of energy in the scrims, and the practice regimen looks good from my perspective.

The other day Brokenshard, you were talking about how each team has a unique trait associated with them what do you mean?

Brokenshard: Unicorns of Love can just throw a team fight into chaos and they'll just win because they know how to play through the mess of a team fight. Origen typically forgets about the laning phase and just roams around and ganks you everywhere. H2K will outrotate you with proper laneswaps, and Fnatic know how to play the midgame super well, though their early game doesn't seem as good.

What would you say is Team Dignitas' trait?

Brokenshard: Team Dignitas' trait is like a balls to the wall aggressive teamfighting style. It seems a very generic style but aggressive team fighting seems to be our trait, along with Kiwkid and Helios forming a roam squad.

Looking forward to your final week of play where you're facing NME Esports and CLG. How do you feel about those matchups?

Helios: I think CLG is a strong team. They have very good laneswap communication. Since it's just one game it can go either way, even small things like good crit chance luck can decide the game. As long as we're not afraid to play aggressive, we can definitely win.

Between NME Esports and CLG, who will you be preparing more for?

Brokenshard: CLG for sure. NME is not going to be as difficult and they're currently struggling with more apparent weaknesses. Meanwhile CLG has their definitive strengths but we can see their weaknesses. This time we'll have more time to prepare for the matches, so I'm anxious to see how we can do with more preperation time available for us.

So Brokenshard, will you be staying on for another week coaching the NA team?

Brokenshard: Yes, I'll be here for next week's matches, after that I'll be back to working with the EU squad.

Rico will likely be back for New York, have you ever been to New York, Helios?

Helios: New York is good. I've gone once before, I went to Times Square and checked out the Empire State Building.

Wrapping it up, do you guys have any shoutouts that you'd like to mention?

Brokenshard: Big thanks to our sponsors who support us and helped me get here. Thanks to our fans supporting us both off and online, you guys are awesome! Don't forget to tweet #DIGWIN when we go 2-0 next week!

Follow Helios and Brokenshard on Twitter @DigHelioslol and @BrokenshardEUW to keep up their their careers and @TeamDignitas for the latest news and content in League of Legends.