Counter-strike: Global Offensive is the first game in the series that introduces a load-out system. This system was introduced in "The Arms Deal Update" as of August 13th 2013 which allows players to not only switch their weapons out for alternatives, but also change the skins on their weapons. Unlike Counter-Strike: Source and Counter-Strike 1.6 these skin changes are global and available for everyone to see: 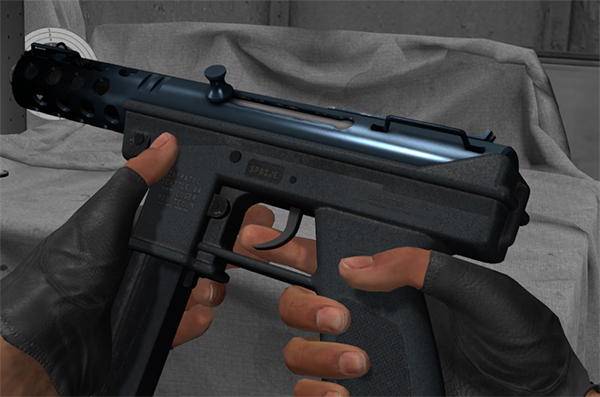 The current weapon choices that players have to choose from are the P250 or the CZ75-auto, the P2000 or the USP-s and the M4a4 or the M4a1-s. These choices introduce whole new dynamics to the game, never seen before in the game's franchise, giving players more choice and control over their play-style by allowing them to choose weapons that are adapted personally to them. The P2000 VS. USP-s and P250 VS. CZ75-auto debates will be covered in coming articles, this article will focus on the M4a4 VS. M4a1-s.

Both the M4a4 and the M4a1-s have positives and negatives when compared to eachother in terms of feasability in Counter-strike. The differences between the weapons are quite small chances but make a massive impact on a player's play-style and can potentially change the out-come of a match. These changes are relative to ammo, the magazine size, the noise made by each gun, the recoil, damage and accuracy of each gun.

Ammo: The ammo of both guns is arguably the most significant change between the weapons as the M4a1-s only has 60 bullets in total, half of the total ammo of it's counterpart, the M4a4. As a result of this, those using the M4a1-s will have to resist the urge of wanting to wallbang enemies as they simply cannot afford the ammo to do so unless these players know precisely where the enemy is and know they can definitely make the kill.

Players using the M4a4 are free to pre-fire while holding positions and can attempt to wallbang without worrying about ammo conservation. As a result of this it is usually better to use the M4a4 to hold positions where enemies can be easily sprayed down instead of out aiming a player. Of course with anything, it is largely down to personal preference.

The Magazine size: This is also one of the most significant differences between the two guns as the M4a4 has 30 bullets per magazine, whereas the M4a1 only has a crippling 20 which can mean the difference between a win and a loss. It is almost impossible to kill all 5 Terrorists with just one magazine (excluding eco rounds of course) as 20 bullets is hard to work with. As a result of this, if you are holding ramp on de_nuke for example, if all 5 Terrorists decide to rush at once it is very hard to kill more than 3 without having to swap to your pistol to finish them off, whereas with the M4a4 you have enough bullets in a magazine to spray for 5 kills.

This can be fundamental later on in the round if you only manage to kill 2 Terrorists while holding a position as it could lead to losing the round. However this factor is very dependent on the position you are playing as it is best to use the M4a4 holding some places like B tunnels on De_dust 2 but better to hold short A on de_dust2 if you're using an M4a1. The choice is personal preference, but it is best to try both weapons in a series of locations and see which one works best for you.

The Silencer(Or lack of): When using the M4a1-s it is very often that you will see players jumping around spinning in an attempt to locate where they are being shot from, giving you an extra 1 or 2 seconds to finish him off before he gets the opportunity to fire at you, potentially saving you from a lucky one tap from an AK. This is especially great in long-range scenarios and ninja scenarios where you could be shooting them from multiple locations and they don't know where you are, for example on de_nuke while holding yard with an M4a1-s, they can't hear the gun so they have to visually locate you, and you could be in a multitude of locations: 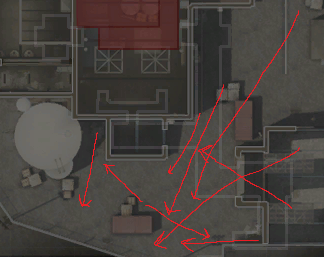 Whereas with the M4a4 as soon as you shoot they will know your location and you have to be sure that you either make the kill or deal significant damage before relocating or hiding as the Terrorists will react much faster to your location. Plus the silencer sounds amazing!

The Recoil, Accuracy and Damage: The M4a1-s with the silencer attached is far more accurate than the M4a4 with it's recoil being a lot more controllable: 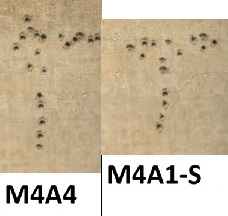 Along with this, it deals slightly more damage:

It is also worth noting that the M4a1-S is longer in terms of model, which means that you are far easier to spot with and it is harder to hide in corners with.

This allows for the conclusion that each weapon excels in it's own field, that there is no real 'best' out of the two, and that you should pick the weapon that suits you the most based on your personal preference, if your play-style suits the M4a1-s and it feels comfortable for you, there is no reason to not use it, the same applies with the M4a4. Use what YOU feel good and perform best with. If you have any queries or questions feel free to comment below!