Interview with Shiphtur about transitioning to Team Dignitas, team synergy, shotcalling and LCS

The first week of LCS is over and we caught up with Danny 'Shiphtur' Le to talk about his first super week with Team Dignitas. Incase you missed it, Shiphtur started off this week with a Penta kill and playing phenominal games in general. We asked him how the team synergy is doing, what it's like in Team Dignitas compared to his previous team and more.

So Shiphtur, you've been with the team for roughly four weeks. How has it been thus far?

Shiphtur: It's been really enjoyable, everyone has a really upbeat personality and the team environment makes it very easy to mesh with.

When you came to the studio on Friday for your first matches with Team Dignitas, would you say you were anxious about the matches or were you confident in the team's performance?

Shiphtur: I was pretty confident in our team's performance, wasn't too surprised by our results, though a 4-0 would've been nice.

Having Crumbz to work with instead of NintendudeX must have been quite a change, but having Zion as your top laner must have been comforting. How was the transition into Team Dignitas?

Shiphtur: Crumbz and I played a lot of Duo queue in the past, we have similar play styles so working on the mid-jungle synergy is pretty easy. We have still have a lot to work on though, but it's getting there. The transition to Dig was pretty smooth, I was familiar with everyone already, and their personalities are very easy to talk to.

How big is the difference in shotcalling between Team Coast and Team Dignitas, and how have you been able to adapt to it?

Shiphtur: Shotcalling is still a problem for us but mainly because we haven't played together enough as a team;we  don't know what the others are thinking, basically playing based off assumptions. But as we grind more games I think Dig will start to have 1-2 dominant shot callers but for now we're still going through growing pains of playing with a new team.

Do you feel there's a big burden on your shoulders, seeing as how you're effectively replacing Scarra?

Shiphtur: Not really, because I have high expectations and standards for my own play. Sometimes even when I miss 1 or 2 skill shots in an LCS match I think I've played poorly.

Scarra has dubbed himself "ZionSpartan's teacher", but seeing as how you've taken over his spot, how has he helped you out thus far?

Shiphtur: Scarra helps me with match ups, how I should play the lane and such. For the team, Scarra gives us a direction as to what we need to practice, how to practice and works with us to fix our problems.

Team Dignitas' first game this weekend against Complexity was a relatively lopsided battle, and you ended the game with a pentakill. Can you tell me something about how the game felt for you?

Shiphtur: It was a bit of a redemption match for me from relegations, so I'm glad we won.

Pick-ban phase against EG, you were banned out pretty hard with both Kassadin and LeBlanc taken from you. What happened in the voice comms that got you to pick that Lulu? Did it have something to do with the Jax and Elise picked prior?

Shiphtur: Kassadin and LeBlanc bans are quite common because of the strength of these champions, the Lulu pick was something that synergized well with Jax but is also a safe blind pick.

In the course of roughly 5 minutes, your 7/2 lead got squandered into a 9/9 tie. What went down from your perspective?

Shiphtur: We tried to do too much with our lead, like doing baron and trying to end the game through split pushing at the same time. Had our shotcalling been a bit more crisp and decisive it would've been a much cleaner game.

Then at the end, the QT-Spartan splitpush into the game winning teamfight: what lead to ZionSpartan pincering onto EG like he did?

Shiphtur: All we had to do was flank on the Pobelter's Orianna because she is such an immobile mage it's easy to get on her. In a straight 5v5 Orianna is god. 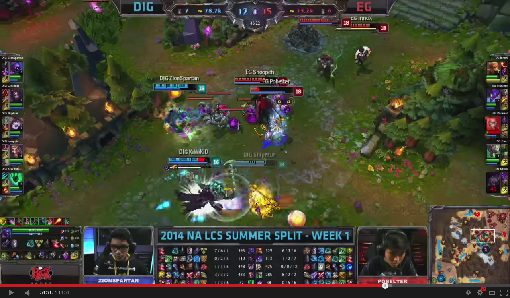 The same banning happened in your game against C9; the Lee Sin was secured and after that, the Lulu came out real quickly. Did this have anything to do with the Shyvana and Lee Sin picked, or was it more about Hai's champion pool?

20 minutes in. DIG vs C9. Dragon. Crumbz has three Cloudians on his tail and the fight ends in DIG's favor. Can you walk us through that one from your perspective?

Shiphtur: Crumbz and I were really ahead at this point and he was looking to collapse. He tags one of them with a q and I told him to go in because I have ult. Hai was split off from his team and I flashed over the kill. 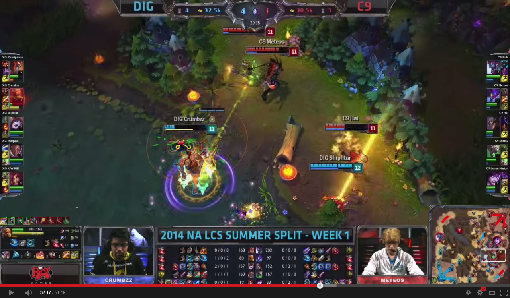 Picks and bans vs Curse; how did you feel about 'your' LeBlanc being take away from you, keeping Friday's amazing performance in mind?

DIG vs Curse; do you think there was one decision or event in that game that cost you the game?

Shiphtur: It was around baron where we won a team fight and could of easily turned back and taken baron, but we over pursued and got punished for it. We didn't play within our team's strengths and win conditions and lost the game off that.

Shiphtur: Shout out to all my fans for their continued support now that I'm on Team Dignitas, shout out to our sponsors for all their support and Thank you for the interview!