Interview with Final Five challenger player, ShorterAce: "When I joined the team I had Prototype White on ignore but in the team he isn't toxic"

Ryan 'ShorterAce' Nget is the jungler for Final Five, an up and coming challenger team. Recently, Final Five finished 4th place in the LCS Expansion tournament narrowly losing to the teams Coast and Fusion. We sat down with ShorterAce to discuss his matches as well as his thoughts on his team.

Ok, so first off thanks for taking your time to answer these questions! Can you give me your background (what you’re currently doing and etc.)? How did you get into League? When did you start?

ShorterAce: I started off playing Warcraft 3 custom games and then went on to Dota. I eventually found League after someone gave me a beta key. I played through the beta and eventually got into it. I'm currently a senior in high school.

Alright, moving on to Final Five. Your team is made up of pretty unknown players (excluding Rhux). I know you have some experience with Cognitive but how did your team recruit the other players? (especially Prototype)

ShorterAce: I don't know, I joined after their other jungler quit.

So you're their newest member? Do you know how old the team is? Why did the other jungler quit?

ShorterAce: From personality issues, I think. Don't quote me on that though. Yea, I'm their newest member and I joined probably around 1-2 months after the team was made.

Oh ok, let's talk about the matches. Were you confident coming into your matches? You were paired against Complexity Black. Was there anything extra that you did to prepare for them (RobertXLee and Bubbadub were just in the LCS)?

ShorterAce: I wasn't too confident until we actually played the games. After we played out the first game, I knew that we could beat them. We didn't do anything extra to prepare.

Your team knew that they could beat them after the first game but how did your team feel after the set? After you found out you were paired against Fusion, did you guys feel like "wow we can actually do this"?

Why did you think Nintendude was a really strong jungler?

ShorterAce: He just predicted my routes and he did what he wanted to do when he played against me. It was really hard for me to gank or do anything against him because he played really agressively and shut me down most of the time. He basically did a lot more for his team. 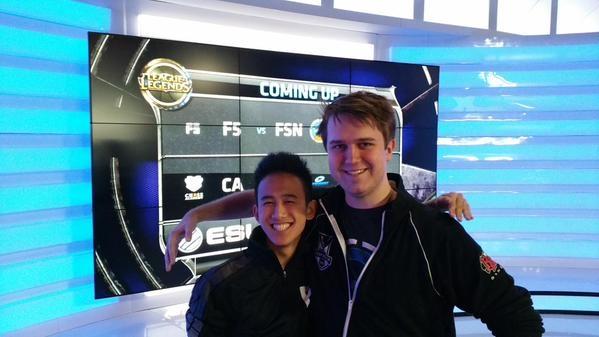 ShorterAce: I'm probably the only player that had jitters. Everybody else on my team wasn't nervous on a LAN setting at all. Our matches vs Fusion were exciting. When we started off 2-0, it felt like the best moment of my life and when  we ended up 2-3 it felt like the worst moment of my life. They really pulled it together after the first two games.

What happened during the first two games, do you feel like your team played really well or did you feel like Fusion didn't live up to the hype? Your team had a really close and hyped up first game but let it slip after the 2-0 start. What did they start doing differently after the second game?

ShorterAce: We threw the third game and in the fourth game we ran a poke comp but didn't play it correctly. We kept having jungle fights with a poke comp when they had an all in comp. We just didn't do what we planned to do.

Okay, so the first set was extremely close and your team let it slip through because of some dumb mistakes. But, how was your set against Coast? Your team won the first game pretty decisively so what was working that game?

ShorterAce: They got really cocky and let some picks slip. They gave us Vayne and Azir so we had our dream comp. Not only that, but we also played the game really well. After the first game, they banned out Azir and that ruined our comp because that was OUR pick that we absolutely needed. Nunu/Azir/Vayne is just a really good comp to run.

ShorterAce: Prototype has over 7000 games with Vayne. I feel like they challenged Proto to play Vayne and let him split push on Vayne with no plan on how to deal with him. After the first 2 games, we just got outpicked and outplayed completely for the rest of the set. Impaler went crazy and his pressure was unreal while we kept making bad decisions.

While we're on the topic of Prototype, he has a stigma in the community and several pro players have said that he's "toxic". I know a lot of people like to joke about it on twitter but what are your thoughts on the matter?

ShorterAce: I mean.. when I joined the team I had him on ignore. I don't play solo queue with him that much but I know that he was toxic but I don't know about how he is now. In team play, he isn't toxic because he plays with 4 other people and it would be pretty dumb for him to rage or anything.

Ok, to wrap things up. Is this the end of Final Five and your competitive career? Do you plan on continuing (you're a senior in high school)?

ShorterAce: It isn't the end of final five and I'll probably continue to pursue competitive play. I have to see what I'll do in terms of teams, if I don't get any good offers then I won't play. I'll just play solo queue and try to get picked up by a team.

Thanks for the interview, any shoutouts?

ShorterAce: All my friends that have supported me through it all, my loving GF sarina & my best friend krissy