Patch 10.15 - An overview of the current botlane meta

League of Legends releases patches every two weeks, and during that time a lot of things change. Usually some champion buffs or nerfs. The general term for botlane is one marksman and one support. So, let’s take a look at this current patch and discuss what works in the botlane! 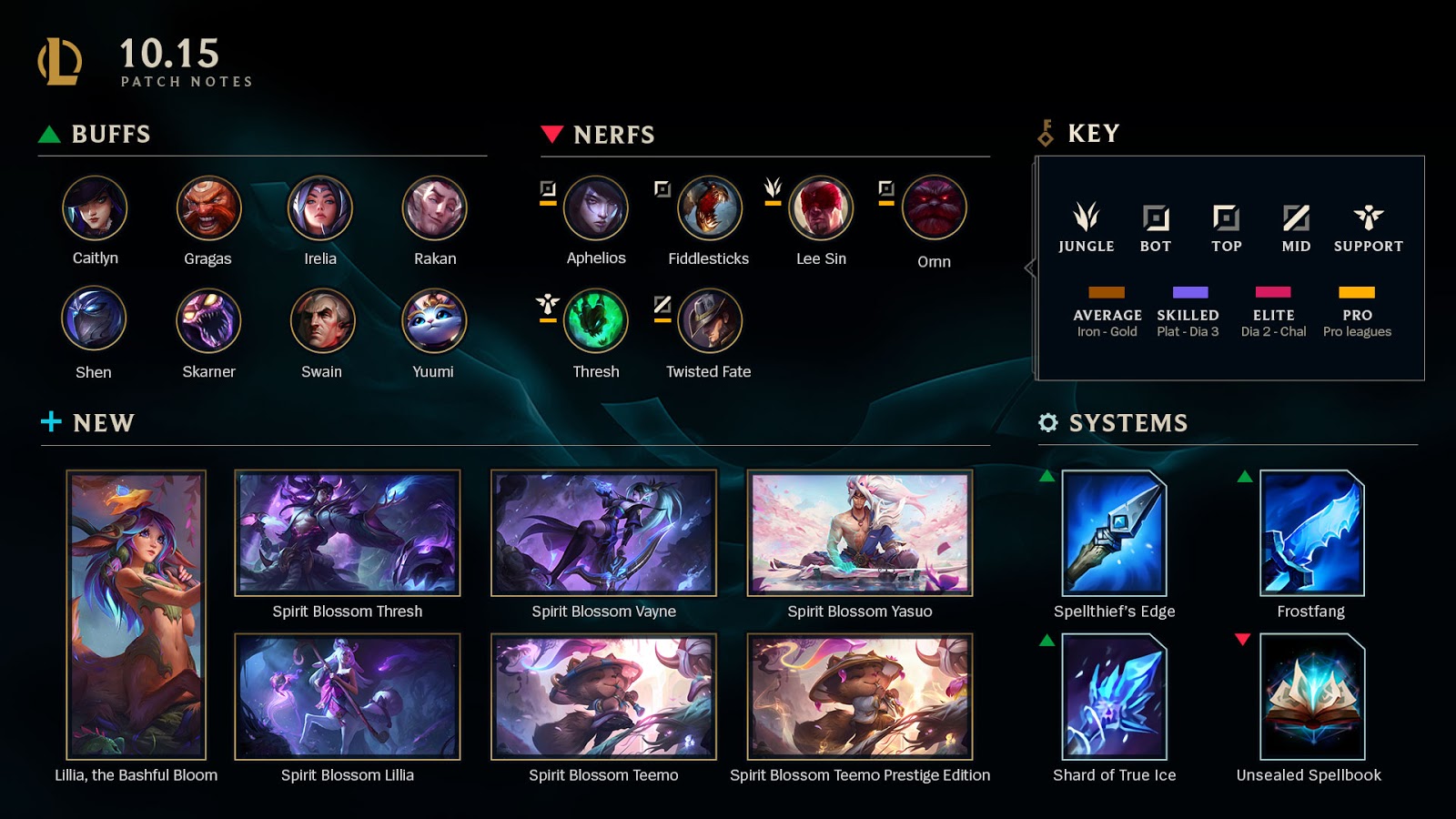 First, we should take a look at what the marksmen received this patch. The first one to receive a nerf this patch is Aphelios, again. His got a big nerf and a bugfix.

Meanwhile, Caitlyn has received some base stats changes. Attack damage increased from 62 to 64 and movement speed from 325 to 330.

Now that we have looked at the patch notes, let’s look at the marksmen ranking for this patch. This tier is based on Platinum and below, analyzed by u.gg. Bear in mind that sometimes winrates do not reflect upon the champion, but the player.

Caitlyn is in 1st place right now, since she just received some significant buffs. She has better survivability if she gets ganked. She can use her E - 90 Caliber Net to escape, and if she manages to place her W - Yordle Snap Trap in the right places, she can escape or turn around on the opponent. She can be a lane bully because she has one of the longest auto attack ranges. Now with the new buffs, Caitlyn players might be kiting even more and do even more damage in lane.

Ashe is still in the top tier, due to the recent buffs to the rune Approach Velocity. By going choosing Inspiration as the secondary rune, going Magical Footwear and Approach Velocity gives Ashe the boost she needs to overpower the opponent.

Old effect: Gain 15% bonus movement speed when moving toward a movement impaired allied champion, or toward an enemy champion whose movement you have impaired. Range: 1000.

Meanwhile, this is a huge reason for her to be placed at 1st place, she also gives us an insight into the current situation of the ADC meta. Ashe provides the team with so much starting from her passive Frost Shot which slows targets. Using her W - Volley slows and damages enemies and following up with her R - Enchanted Crystal Arrow that stuns across the map. One could say that she “counters” the meta.

Vayne got pushed down to S Tier. Earlier she was in S+ simply due to the fact there has not been any buffs to other ADCs, but Caitlyn did. Going back to maxing W - Silver bolts instead of her Q - Tumble gives her the damage she needs.

Draven is a harder champion to master, although he was in S+ last patch, he got bumped down to S as well. Right now, buffing “easier” champions to master like Caitlyn, puts him lower. The reason is due to his passive League of Draven, he must stack well with his Q - Spinning Axe. The axes might be harder for some players to pay attention, but if you can master him properly, Draven will carry the team. He is high risk and high reward type of champion.

Jhin is now the last in S tier because Ashe and Caitlyn win more, and he is easily caught. An example would be the CC that Ashe and Caitlyn provide. He do have utility with his W - Deadly Flourish, which can snipe and snare from afar, and his E - Captive Audience slows and provides some vision.

Senna as ADC has not changed much, players are still running the Inspiration Rune Glacial Augment which slows and makes it easier to collect stacks for her passive Absolution.

Jinx got buffed in 10.11 increasing her base health increased to 610 from 581 and health growth increased to 86 from 84. Note that this patch buffed the majority of the ADCs, giving them a stat boost, except for marksmen that are played in other lanes. Jinx is a simple champion and easy to pick up in the case of autofill. She scales well which earns her the hyper-carry status.

Twitch is a stable A and that is due to the general idea of Scaling ADCs. He has not received any changes recently that make him significantly stronger or weaker. The strong part is the fact that he can benefit from the newly popular Manamune build. The build consists of Manamune, Infinity Edge, Berserker’s Greaves, Runnaan’s Hurricane, and items that the team needs. In general, this might be costly in terms of gold and time, but this makes Twitch quite powerful.

Miss Fortune is a simple champion and with her Q - Double Up, it is easy to poke enemies. In this patch she was placed in A tier, as other ADCs are falling. She has gotten a few nerfs back to back, but these were nothing compared to champions like Aphelios and Ezreal. These nerfs were bug fixes that removed animation canceling. In terms of survivability, it is not easy for her to survive without proper mobility. Her W - Strut helps if she has not received damage for 5 seconds, activating it gives her immediate active movement speed, but this is not enough to put her in the higher rank. Her W received a nerf 10.10 of maximum bonus movement speed reduced to 50 / 60 / 70 / 80 / 90 from 60 / 70 / 80 / 90 / 100.

Even when Kog'Maw was buffed 10.13 where he got a higher AP ratio on his Q - Caustic Spittle and his R - Living Artillery, his rank in the tier list has not changed. The interesting thing is that Miss Fortune was placed in A, and Kog’Maw replaced her spot in B.

Xayah is seen less in Plat and under, and apparently, she is either a D or a C in higher ranks as well. Whereas she is moved to B tier in Challenger. She is less picked these days as it seems like that her recent buff in patch 10.12 was not enough. Her R - Featherstorm received a buff, base damage increased to 125 / 250 / 375 from 100 / 150 / 200. She requires some time and effort to carry the team, which might not be good enough. She doesn’t provide much utility to the team and the only way to avoid threats is to make use of her R properly. One might think that the reason for her A tier status is due to the Rakan buff, people who run Xayah and Rakan in the botlane.

Lucian received a buff in 10.13, giving his Q - Piercing Light an increase of effect radius increased to 1000 units from 900. This did not help him get a higher tier this time. He has been on D tier for the past three patches.

Kai'Sa has not been seen lately, but she was buffed a few patches in the past. She was given the most during 10.11 with the buff on her stats that every ADC received and her Q- Icathian Rain Bonus AD ratio increased to 40% bonus AD from 35%, her R- Killer Instinct range increased to 1500 / 2250 / 3000 from 1500 / 2000 / 2500. The fact that you can build her in different ways, might change the ranks. Looking at the most played build, it takes so much time to stack Tear of the Goddess and gold. She needs to snowball as well to carry, and she is very dependent on passive procs and items.

Ezreal was last seen as S+ in patch 10.13 and the reason for that was the item Death’s Dance. But 10.13 also balanced the item, nerfing the Damage storing for ranged champions reduced to 10% from 20%. The champion on its own was very strong, and as mentioned earlier he also got nerfed himself putting him in the first place in D.

Aphelios was also one of the champions hit hard by the Death’s Dance, and especially this patch. This champion is certainly not easy to master, therefore he is picked up less too. He is very popular in the top ranks and also on the professional stage and is often considered a must ban. In teamfights, he can provide a lot of damage, but he is also an easy target if he is exposed to CC. On top of that, he was nerfed to the ground.

Enchanters are important assets to the team, they provide the carries buffs and the shields that are necessary to survive a team fight. A perfect example in the current meta is Lulu. Lulu is in the first place of the S+ tier and there’s a good reason for that. Her E - Help, Pix! Provides a shield that absorbs damage, and Pix will also aid with auto-attacks. In addition to that her W - Whimsy can either buff your carry or debuff your enemy by disabling them.

Tanks are the main CC in the team, they disrupt, engage, and peel for their carries when necessary. The typical tanks on top of your mind would be champions like Leona, Braum, Blitzcrank that can soak a lot of damage. Currently, Blitzcrank is holding the highest spot in the S+tier. Landing the Q - Rocket Grab and E - Power Fist combo will make it nearly impossible for the enemy to escape. If there are chances of escape, it is possible just to use his R - Static Field to silence and prevent their escape. Meanwhile, Leona can stun-lock and with her passive- Sunlight, the team will deal additional damage. Alistar players might be more visible, as he has gotten a buff on his Q - Pulverize last patch. Cooldown reduced to 15 / 14 / 13 / 12 / 11 seconds from 17 / 16 / 15 / 14 / 13.

Mages in the botlane, the reason you see them is to provide the team with AP if the team is lacking AP, and the fact that they can deal a lot of damage to prevent the enemy from for example farming and scaling. Typical examples are lane bullies such as Brand, Zyra, Lux, and Xerath. They don’t need items early to deal damage, which makes them the ideal lane bullies. Bear in mind that mages for support are usually situational, they don’t benefit the team in terms of buffs and shields, they are damage dealers, and therefore not suited for every team.

Lastly, it would be Pyke. He doesn’t fit in as a tank nor enchanter, but he is a unique type of support integrated with the assassin role. He is a support that is difficult to master, but he is the same as Draven, high risk, and high reward. He has not been seen in the lower ranks lately.

(Pyke just doesn’t have a place in the current meta, although his tier is not too bad.)

The tiers and standings are based upon numbers. This means that builds, nerfs, and the current meta are taken into consideration. However, don’t let it stop you from playing your main if that’s what you are comfortable with.