Season 2020: Making the Most of Your Ranked Games

Today we're going to try to talk about some of the not-so-common things that most people don't think about, but can really positively affect their gameplay in one way or another. I'm sure if you do your fair share of reasearch, most guides will inform you to do things like brush up on your mechanics or utilize the practice tool in order to get those Faker-level combos down, but I'm going to dive into some of the more mental parts of the game that a lot of people ignore. In League of Legends, the game is as much mental as it is mechanical and ignoring one will often impair the other in some way or another. So, let's get you in check.

Okay, let me preface this by saying that I don't mean the typical goal of "climbing". Naturally, everyone's goal is to climb, but having a realistic and tangible goal can often help you feel more rewarded about your accomplishments and help take some of the drag out of grinding. The last thing you want to do is feel like you're grinding your time (and life) away for no sort of gain, so set small goals and celebrate your milestones.

Numerous third party apps include some sort of elo/rank graph that you can use to visually monitor your steps as you fall/rise within the ranked ladder, and sites like Mobalytics even come with a system where you can manually set a goal of where you'd like to be at the end of your ranked season and they even tell you how realistic it is based on where you are and how you've been performing.

In addition to this, you can also try to have a goal while you're in the game. This goal could be something outside of the obvious one (winning) and you can even make it related to your self improvement in certain categories such as:

If you set your goals small, it also can give you a confidence boost, as the smaller goals are often easier to attain, and your confidence may improve as your successes increase.

Piggybacking on those last tidbits about tilt comes the notion that you should not enter games with the wrong mindset. Do you know those inspirational quotes about how a positive mindset also tends to result in success? Well, they're not always 100% true, but they're helpful for a reason.

Your mindset makes all of the difference in terms of how you even begin to approach a game. If you jump into the game with a positive mindset, you're generally confident in yourself, optimistic in your chances, and willing to take the necessary steps towards securing the victory for your team. But if you come into the game with the mindset that you don't want to listen or communicate with the team, your game will be just like (or as bad as) the last one, and that nothing matters or you have no control over your own ranked fate, you'll play like it. You won't try. You'll play with the clear lack of confidence that'll prevent you from acting, you may resign to picking and playing things you have no business playing (that 10% win rate Yasuo that you promised to keep locked up unless URF was available) and when/if you lose, you'll just use that as a self-fulfilling confirmation to approach the subsequent game the same way.

This not only ruins the experiences of your teammates, who are playing to win and climb, but also your own. So be sure your mental is in check prior to each game.

Great ways to ensure you're in a good mindset prior to your game include:

Stick To What Works

So, for this, I am saying to be a meta slave for sure. Not necessarily in terms of what is working for everyone else, but definitely in terms of what is working best for you. While it's also true that synergized team comps can help you climb better, none of that matters if you individually suck at what you're playing. It doesn't matter how well you've heard AP Malphite is at teamfights if you don't have even the basics down to make it through laning phase to that point. It doesn't matter if Ezreal jungle is OP if you're terrible at landing skillshots. It doesn't matter if mage supports are stronger in lane if you can't position well enough to not get caught out. Get my point?

(Based on these numbers, what do you think I should keep playing in ranked? Give up?)

Think of META as an acronym that means "most effective tactic available" and apply it to you. You can almost always find out what your meta is by checking sites like OPGG or Mobalytics and comparing your winrates across various champions and roles. Once you have an idea, stick with it until it's no longer working for you, then move to the next best thing.

I'm not saying that you have to one trick your way up or even be a jack-of-trades, but at least show yourself (and your teammates) that you're trying to win by playing the stuff that you're proficient at.

Roll with the Punches

This'll be the shortest section because most of what would go here can easily be found in the section about your mental, but here goes:

Yes, these things are all frustrating. Throwing a tantrum or sabotaging your team for it is worse. Sometimes there will be games that are out of your control, but as long as you focus on capitalizing on the ones you can, you'll be fine.

Knowledge is power. Whether it's on the rift, in champ select, on r/SummonerSchool or r/LeagueofLegends, directly from the mouth of a Riot official themselves, or even from your favorite streamer, knowledge is power. 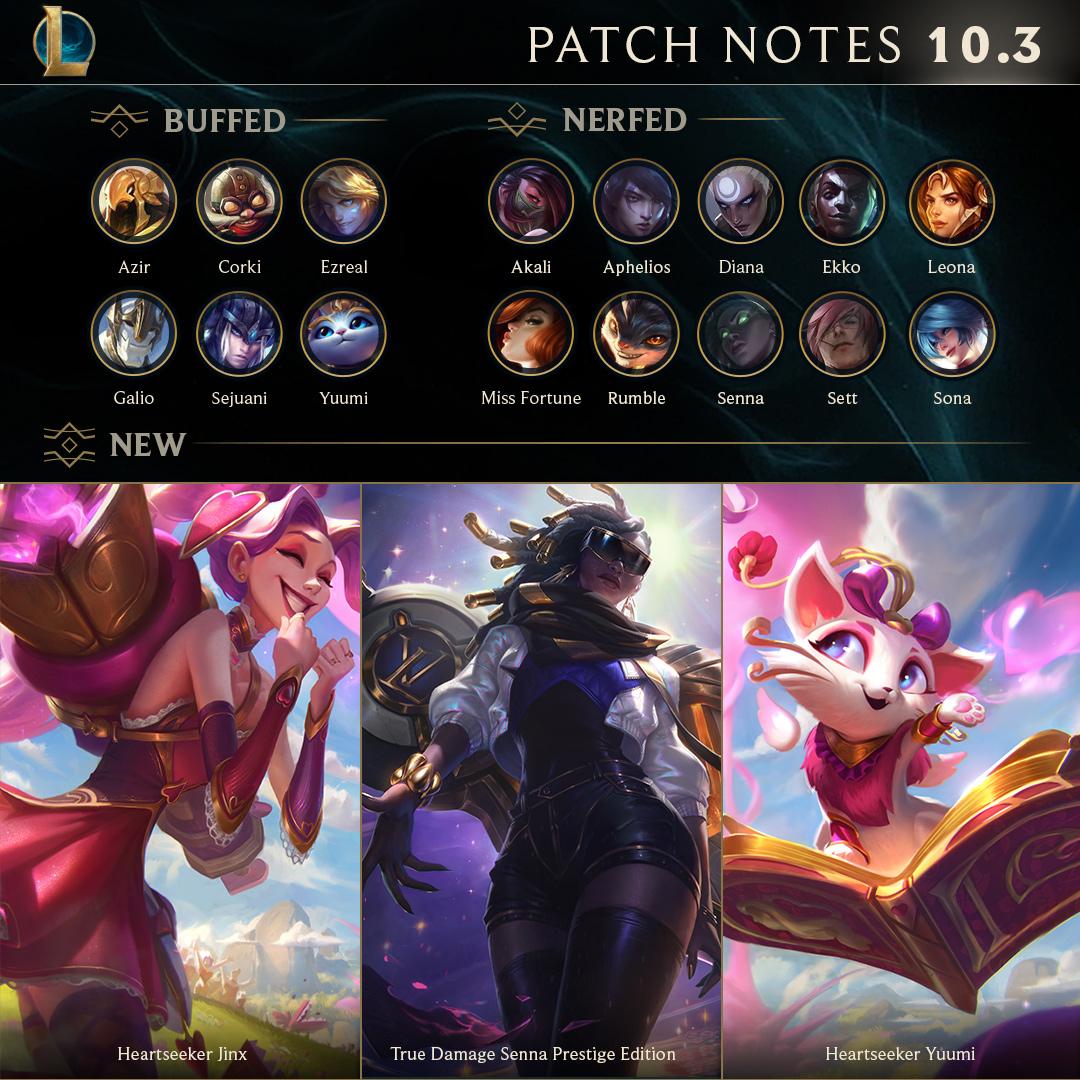 (Picture taken from a tweet by Moobeat of Surrender at 20 in regards to upcoming buffs/nerfs for patch 10.3. While the skins aren't as important, knowing about the stat changes and kit changes to the champs you play with/against can prevent you from being caught by surprise in your games.)

Knowing this, it'd be wise to brush up, whenever possible, on any changes that occur within the game. You don't have to watch every stream of the LCS or LEC to know what's going on, but it should be in your best interest (especially if you're a returning player) to get as familiar with the current state of both the game and your champions as possible. Experience is often the best teacher but knowing about something beforehand can often enhance the experience.

Ultimately, you have the most control over your experience. That being said, always try to make it a good one.

In any case, try to use these hidden gem tips to improve the quality of your games even before you set foot in them. Stay focused, stay consistent, and stay vigilant to ensure you are keeping these in mind, and I'm sure you'll make the most of your ranked games this 2020 season.

With that being said, good luck. I'll see you on the rift.

Check out the Energy Pro Dignitas gaming chair for a whole new realm of design and comfort!