The Art of T-Side Awping - a CSGO Guide

Before I go into detail about how to AWP on T-side, know that you don't have to necessarily AWP close quarters to be an amazing T-side AWPer. There are many styles that I will tell you about and, if you aren't comfortable playing close quarters, stick to another style that resembles how you play.

The first playstyle you can play as is a more supportive AWPer. For example, take Banana on Inferno. An AWPer can hold Car in order to let the rest of their teammates not worry about that angle and setup flashes, molotovs, or smokes. This is very useful as it gives your teammates more space to work with. Also, on a big map like Dust 2, your team could take Long control early and you could stay behind in Pit to try to catch the CTs off-guard while your teammates go elsewhere.

The next playstyle is a lurker for your team. When your team is executing B site, the lurker might remain Mid or go out late onto a site to try to catch the Counter-Terrorists rotating. This role is made to cause confusion amongst the CT-side and either make executing on to sites easier as the CTs are hesitant to rotate or make the after-plant situations easier on your team. Lurking is a role that you can truly make your own, but it is very different that every other role. For one, you can't lurk every round, as the enemy team will learn to adapt to it. On top of that, it is essential that you keep track of every enemy player that your teammates hear or see. If your four other teammates on A Ramp say they hear an enemy running in Mid, you need to be able to remember that as you are by yourself, which is very risky as is.

The final main playstyle is an entry AWPer. If you enjoy close-quarter AWPing and more head-on duels, this is the role you should look towards. Entry AWPers are the players that go in first to look for picks for their team to get that early advantage. Take the video below. By taking out that player on A site, there are many chain reaction style effects that take place due to that on kill. First, and most obvious, the A site will be very open which will make it very easy to take site control. There will, normally, be only two players on A and by taking down one of them, it stacks up pressure on the remaining player which normally causes him to peek and try to get a pick which leads to him dying. By getting that one pick, you could have just won the round which shows the true power of the entry AWP.

Alternatively, in the situation, you could have your team waiting outside B site as that pick will most likely draw rotations over to a site leaving B site open. Another alternative is if that pick had happened in Mid. If you take down the player who normally plays Mid alone, it allows you to get easy access to CT and basically overwhelm B and A site players from three different angles. But, while the entry AWP might be the most impactful, it is the hardest to do consistently, and while in the entry role, it puts lots of pressure that not every player can handle. However, if you do it right, you will definitely lead your team to victory.

Even though choosing a playstyle is essential, you need to know that you can hit your shots with high accuracy so let's take some time to go over different skills that you will need to improve to be the best AWPer you can be.

Reaction time is a very big factor in your success in AWPing. For example, if you have a 300ms reaction time and you're trying to peek into an AWPer who was a 250ms reaction time, the odds are more in his favor than yours. While there are maps in CS:GO to practice this, I prefer using an external website called human benchmark as there is sometimes input lag for the game. Also, your reaction time won't magically improve overnight. Just like your aim, it will take time to improve your reaction time but in the end, it will be worth it. However, reaction time isn't everything. Even pros like s1mple don't have perfect reaction times, but having a faster reaction time might just help you win that AWP v. AWP duel.

Some may say that you only need to practice flicks if you are an AWPer but that is, in fact, not true. Instead of thinking of flicks as KennyS going around the map and killing everyone, think of flicks as simply moving your crosshair from where it is onto your opponent and the best way to practice these flicks is through Workshop maps. One of the best maps for this is training_aim_csgo2. This map helps you build muscle memory so that while you are in-game, you will know exactly how much you need to move your mouse in order to kill your opponents. Also, in order to help get your muscle memory, try not to switch around your sensitivity or mouse that you use every day as it will negatively affect your muscle memory and get you confused on how far you need to move your mouse. If you want to take this a step further, consider following WarOwl's guide to improving muscle memory as this concept applies to lots of skills.

As it is, you are carrying a heavy AWP on the side where you have to kill CTs that could pop out from 30+ angles when going on sites, so it is important to have good crosshair placement or pre-aim common angles to make it easier to kill your opponents. Instead of learning exactly where each angle is, try to think of where you would play on CT-side based on the situation and visualize that angle. Utilize crouch peeks and strafing to peek each angle one by one so that you aren't wide in the open with twenty angles to look at and doing so will greatly increase your chances of survival.

Adapting to How Your Enemy Plays

It is essential, especially as an AWPer, that you try and remember where your enemies like playing on sites and how many play each site because you need to know the general area of where to look. AWPing on T-side is very hard to do because while going onto a site, you can easily get picked off as you don't know where the enemies are versus CT-side where you know exactly where the enemy is coming from. Therefore, picking up that one guy plays back Arches or Emo every round is very important as you are slower and more vulnerable with the AWP.

Using utility is near essential to your survival and also makes it easier to attack sites. For example, if you Molotov Coffins on B site Inferno, that's one less area of the map you have to worry about, which makes it a tiny bit easier to enter onto the site. The same goes for smokes. Smokes allow you to get closer and isolate different parts of a site to get those 1v1 duels against the isolated players which have a higher rate of success than the 1v2 or 1v3 skirmishes it would be without utility.

Playing off Your Spawn

Playing off your spawn, as simple as it sounds, is an easy way to get picks at the beginning of each round. Even if you are a more passive AWPer, you can go look for a pick at the beginning of a round and then return to the more passive style. To determine where you should look for a pick, simply look and see where you are closest to at your spawn point. By doing that, you can guarantee you have the advantage while peeking and your opponents are still trying to get into position. By simply looking at a map of timings for each team per map, you can tell which angles are best to peek and guarantee the highest chance of success at. 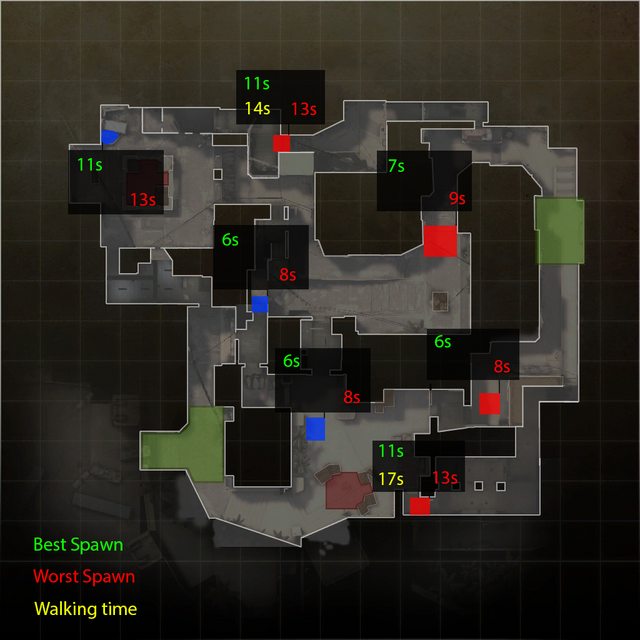 While all of these skills are very important, you need to make sure you have great aim before you start AWPing. AWPing is the same as shooting normally except you have to have an even higher accuracy then you would if you are AWPing, so be sure to practice aim along with all these skills. If you have any comments or questions about my guide, feel free to let me know on Discord! My tag is Zain#4451. AWPing on T-side truly is an art, so good luck mastering it!