Getting Caught Out: A Guide to Positioning - Part 1

When newer players talk to me about dota their main focus of grievance generally seems to be that they die to much. Which in itself sounds like an easy problem to fix; stop dying. While dying less sounds good in theory, it's extremley difficult to implement. Many new players often don't understand why or how they die in a certain situation, many will even blame their death on others. If there is one thing players should note it is that you can always avoid death one way or another. Even if you get caught out with the entire opposing team surronding you there is always something you could have done to remove yourself from that situation, either before they catch you out or during their gank attempt.

When I say "catch you out" it is just another way of saying being caught out of position or off guard. So what is the right position in the first place? Catching someone offguard can generally involve a few things which we will discuss in this 2 part article. First and foremost is that most often position errors come from the lack of vision. When someone is telling you to buy wards they aren't trying to boss you around or be a jerk (unless they are a support), they are looking out for the teams best interest.

Wards give you overwhelming map vision and allow you to have greater sight and comprehension of the opposing team. Wards allow you to not only understand where the opponent is but also give you a glimpse of what they could be working towards in terms of items. If you see an Enigma in the jungle with an Ogre Club on him there is a good chance that he is probably going to be getting a BKB somewhere in the near future. This is why you see professional players wait until they have the exact amount of gold needed to buy the entire item. It is much harder to tell if he is going Mek or Pipe if you can't see the headdress/buckler/veil in his inventory.

That being said positioning isn't just about vision, it's about where you are on the map relative to other players and buildings; in essence where you are currently standing/moving to. It's also about analyzing the situation and understanding who can effect you in what way. Knowing opponents items/abilities is paramount when it comes to pushing/fighting/defending and pretty much everything else in dota. The main point is the more you play the better your positioning comes. If you get caught in the long lane while the rest of your team is either in the well or another lane it's pretty much your fault. 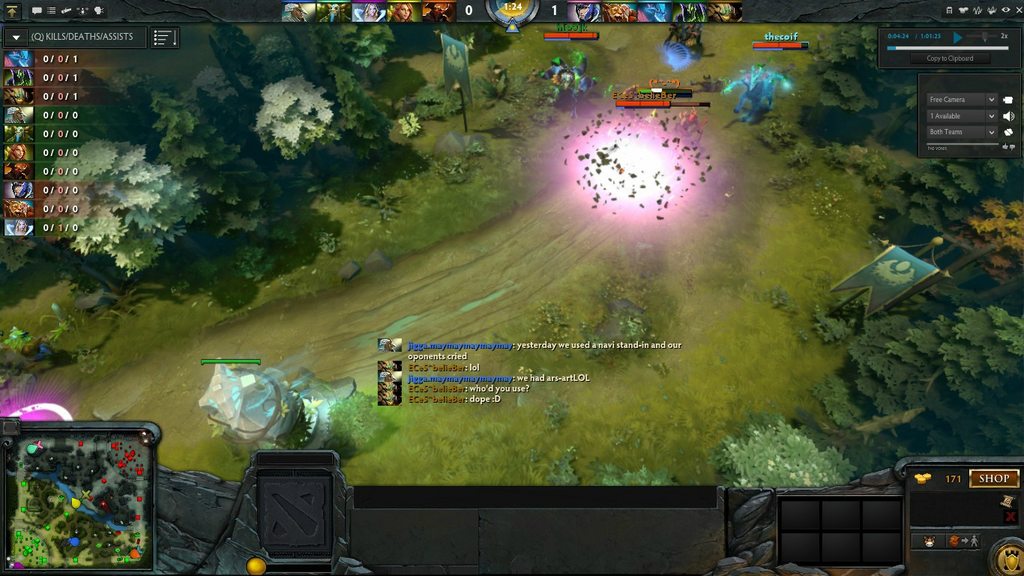 Once you make that mistake you realize what you have to do to fix it and you take steps in your next game to not make the same foolish decision. DotA is as much about learning as it is about coordinating. In the second part we will talk about how positioning works in combination with your team and team fights, but for now lets just focus on the laning phase.

The laning phase is a term given to the period of time that extends from when the game first starts at 00:00 until somewhere around the 10-20 minute mark (perhaps quicker depending on the skill level of the teams). During this time your team is split apart from one another focusing on your own lanes. You use lanes to divide up farm evenly in a game so your carry in the long lane can get farmed. Your middle lane solo can farm quicker to focus on ganking and your suicide lane heroes can focus on denying the opposing carry any farm possible. It is also important to understand how lanes are set up in the first place. Check out XVRogue's guide on lane configuration in this video.

Generally during the laning phase your team will try to accrue as much CS (creep score) as possible. The more CS, the more farm, which is a good thing (unless you are a hard support). When you first head to your lane ideally you want to grab as much vision and information before you begin farming. When you head to your lane don't be afraid to check out the jungles as long as you realize when you need to back up or get out in the event of a jump. While it is unlikely in a pub match that someone will be looking for you in your own jungle it is possible and certainly happens in higher skill brackets.People are more likely to run agressive tri-lanes with heroes like Chen, Enchantress or other good junglers in a higher skill game. You also often see 5v5 team fights before the game even starts in professional games.

While your gathering vision in the jungle you can take time to throw down your wards to give you more vision. It is important to note that if you are in the hard lane you can head into the jungle and throw a ward on one of the creep camps. to this makes it so the creep camp doesn't spawn so the opposing team can't use the creep camp to pull the on-coming creep wave. If you'd like to check out a more in-depth guide onto warding head over to this guide.﻿

While vision can give you the necessary information to avoid a gank or a death you have to put that information to good use in order to survive, especially if you are in a situation where you are facing an agressive tri-lane. I recently played a scrim match in which myself (a Crystal Maiden) and a Chaos Knight where matched up against a tri-lane consisting of Sand King, Leshrac and Rubick. That is a lot of CC ability with plenty of stuns to lock us up for an easy kill. 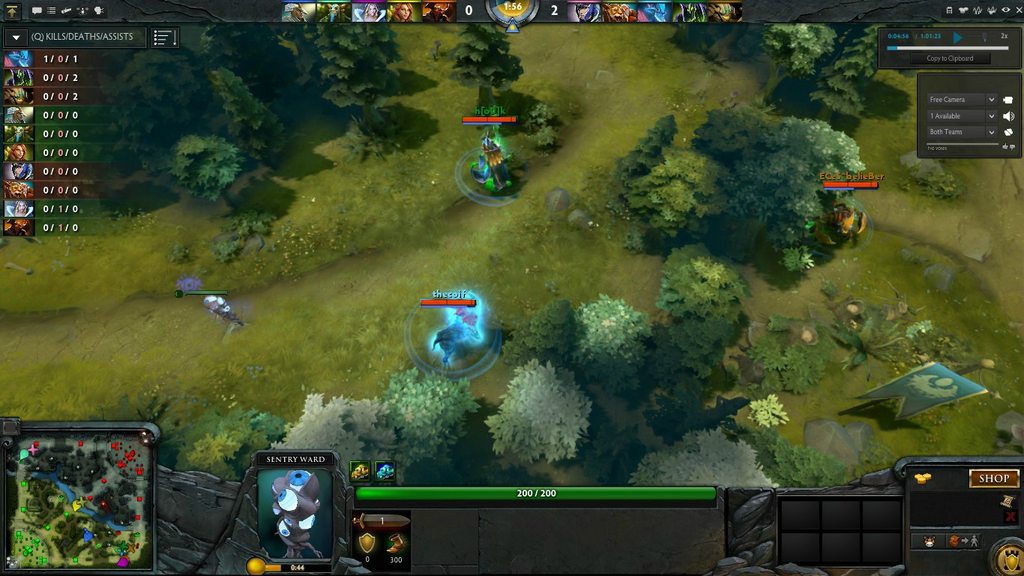 In the above picture you notice that we have vision of all 3 heroes. However, instead of backing off towards the tower or asking for Chen to come in and help, we stray pretty far away from the tower and chaos ensues. 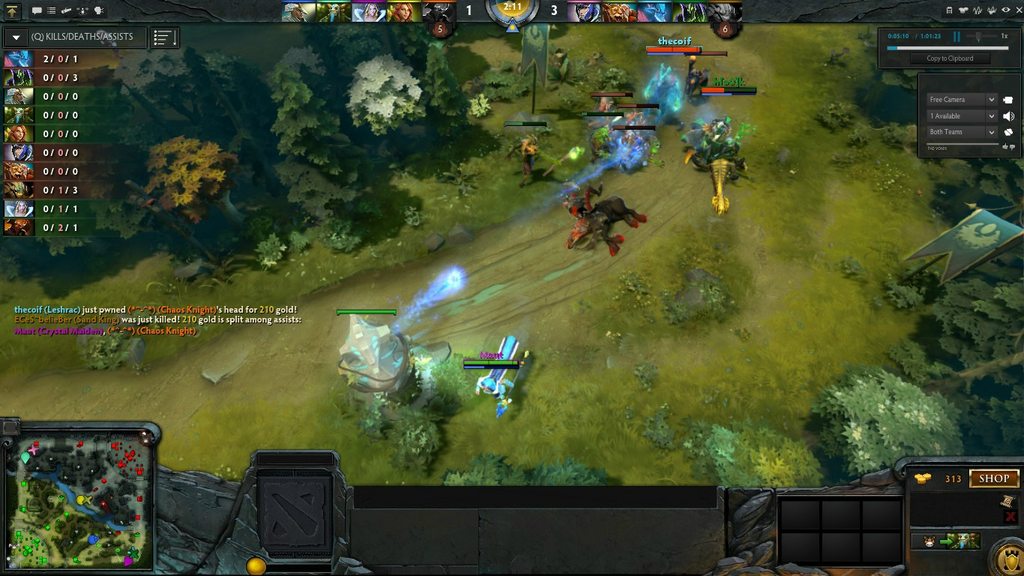 ﻿As you can see, the Chaos Knight was burrow-striked followed by a Telekinesis from the Rubick which was too much CC and ended up in his death. However, the Sand King had to give up solid positioning by burrow-striking the Chaos Knight. He moved into the towers range and aggroed it, after the tower had aggro I was able to use my Frostbite to hold the Sand King in position where he took a few more tower hits before going down. Shortly there after they turn their attention towards me and want to dive the tower in order to get the kill. What's important to note is that we have a Nature's Prophet on our team which means global presence/positioning so when they dive the tower Rubick takes a good deal of damage and Chen and Furion rotate in to to get the kill. 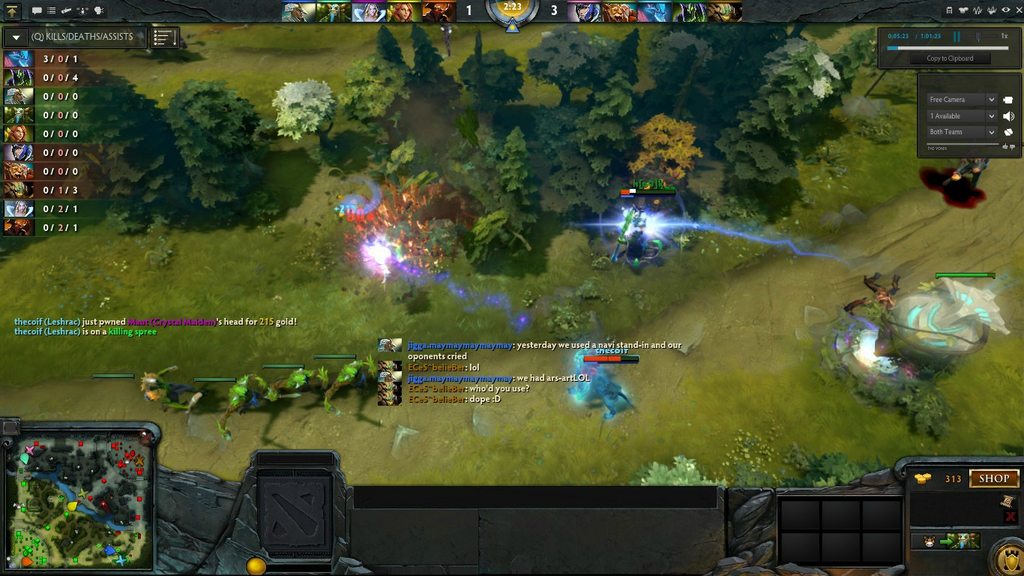 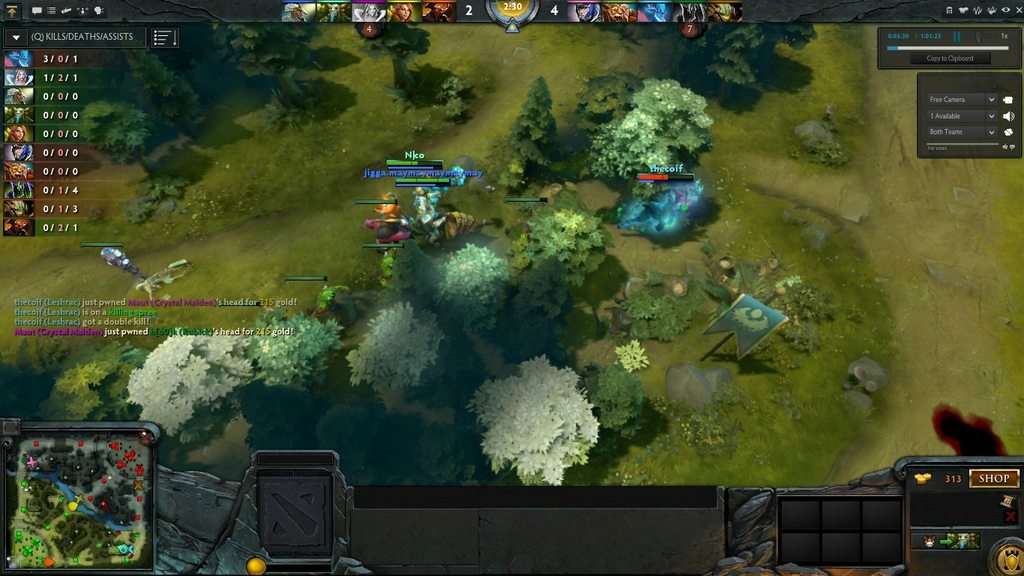 We Realize that Leshrac and Rubick have moved to the jungle at this stage in the game to find Chen and catch him out with a kill. Our Chen does the smart thing and sends his creeps into an area where he doesn't have vision. They will kill his creeps but he will survive and we also get valuable vision to see that they are in the jungle leaving Sand King alone against a Chaos Knight and a Crystal Maiden. 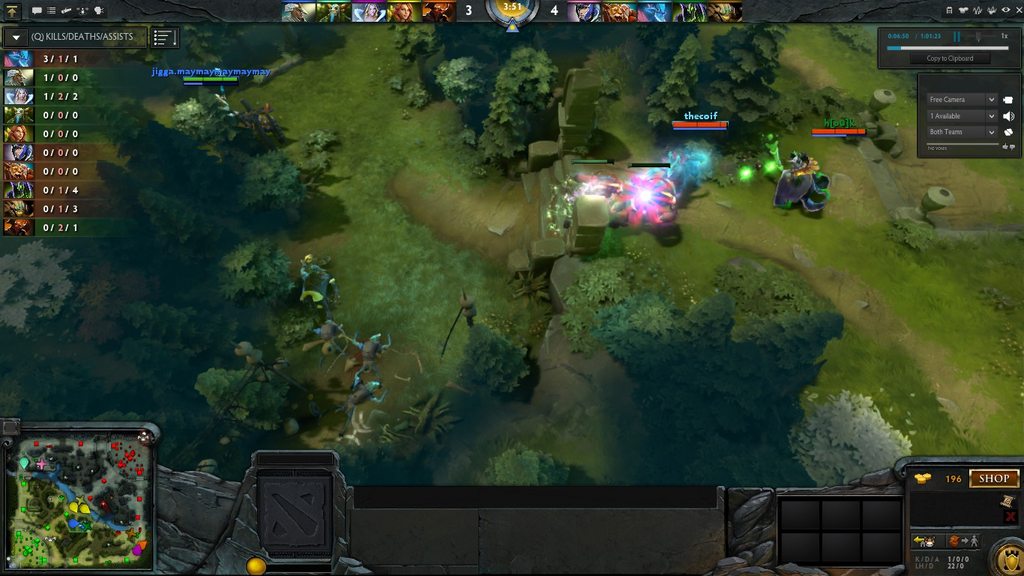 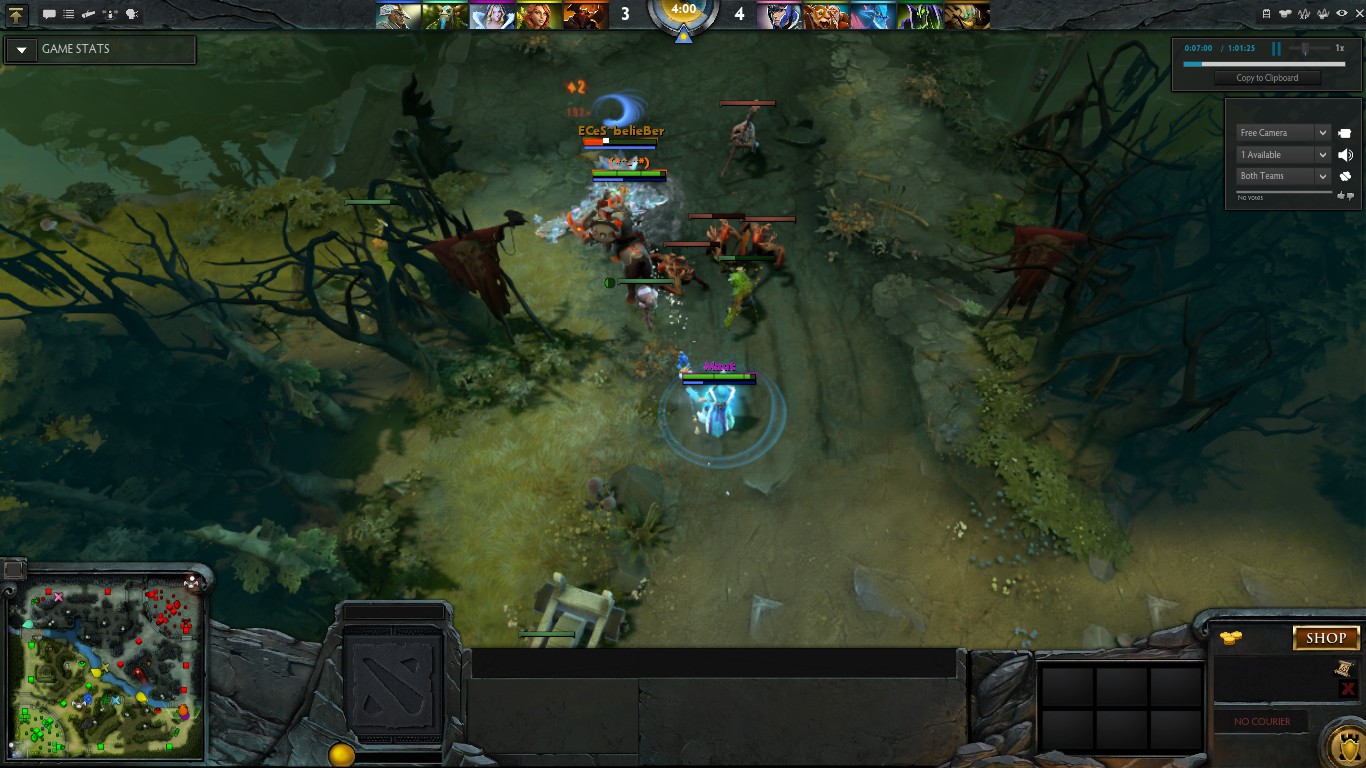 This next example is the number 1 reason why I see pub players die so often. Many players will assume that if they are farming alone in a lane and the entire opposing team is missing they wouldn't all come down just for a gank on you. On the contrary that's exactly what they are doing. Teams build on their advantage by getting easy kills and catching heroes out, alternatively if a team is down a great way to get back into it is to catch a few heroes out of position by utilizing a smoke gank. When a smoke gank occurs you are invisible from the enemy team until you are right next to an opposing hero. That means you can cross through ward sight without being seen and can get into a good ganking/team fighting position without revealing yourself. Smoke is one of the most useful items in the game and is rarely utalized in the lower Matchmaking brackets. In competitive play smoke ganks happen regularly and can turn the tide of a game.

In this last example, we see Sand King get caught out of position when the 4 of us rotate down to the bottom lane, we didn't have a smoke on us but this is typically the type of gank you would see if you were smoked up. This gank isn't really considered part of the laning phase but because it's so early in the game and we have such mobile heroes like Furion I decided to include it in this part of the article. 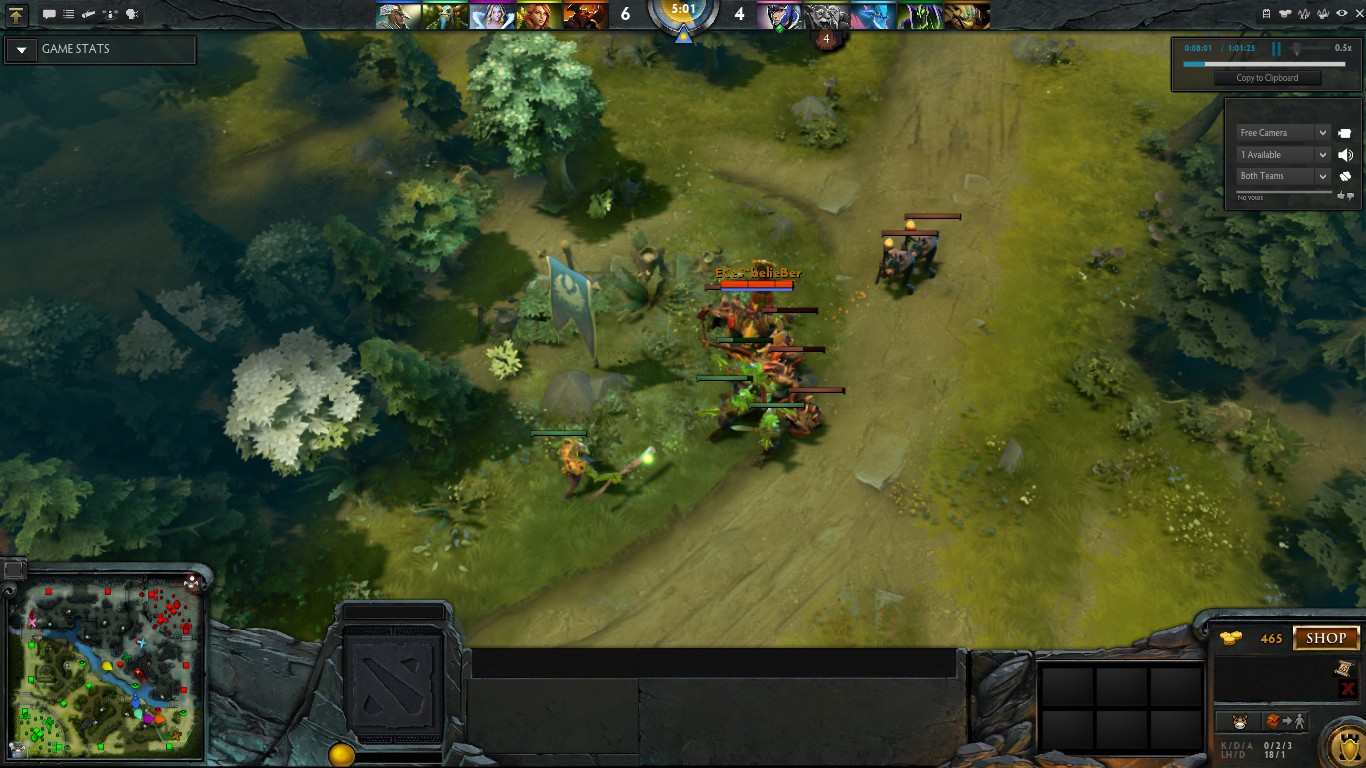 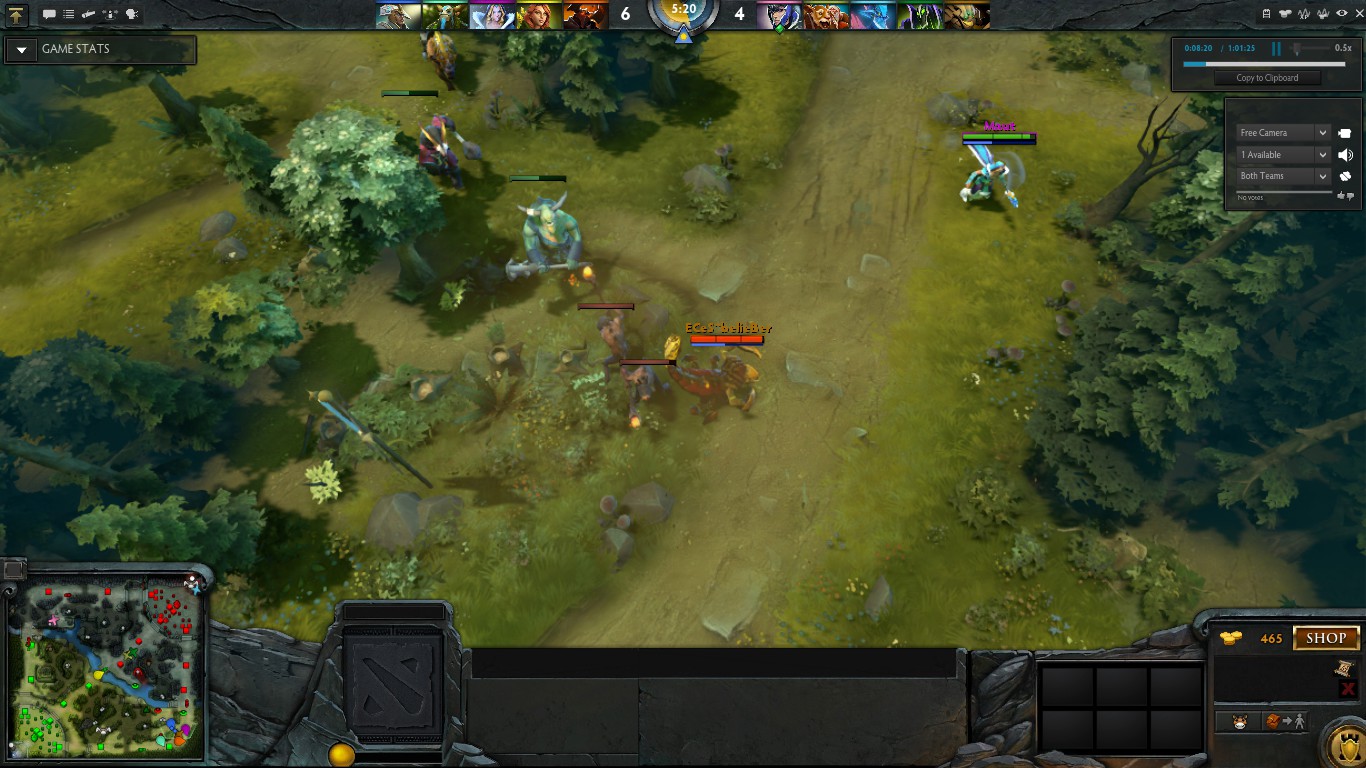 There are many more positioning errors then the ones I've shown you in this article, but keep in mind the biggest thing with positioning is to learn from your mistakes and grab vision whenever possible, even if you are a carry it is sometimes ok to buy wards to give you  peace of mind when you are farming. Always check your minimap. Pro players will often tell you that they spend more time looking at the minimap then they do the actual game itself, this is true because you tend to learn things about your enemies through the use of the minimap. The minimap tells a story and to not use it is ignorant and illogical. You are not invincible, play smart and play sound. Above all else, keep playing and learn from your mistakes.

In part 2 we will analyze smoke ganks, team fight positioning, when to split push/rosh/defend/jungle.